2021 will be remembered for some of the best dance numbers that made us shake our legs to their beats. From Nora Fatehi’s Kusu Kusu to Akshay Kumar and Katrina Kaif’s Najaa, let’s take a look at the best party tracks of 2021. 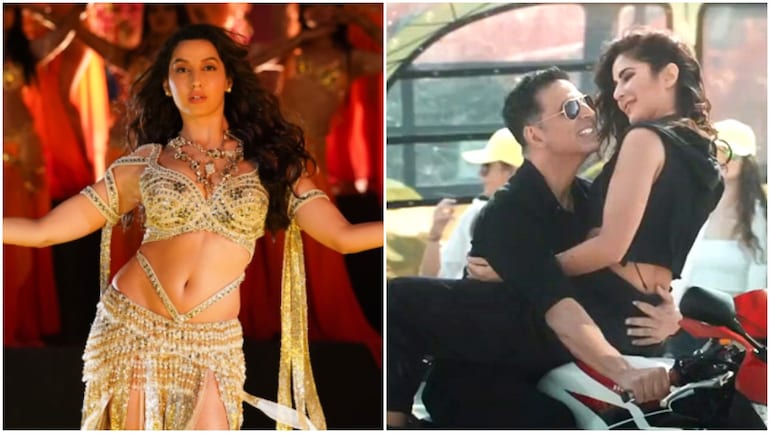 As 2021 is about to end, we can’t wait for the New Year party to begin already. And when it comes to celebrations, upbeat tracks are a must. While nothing can beat the charm of Amitabh Bachchan’s Jumma Chumma De De or Sukhbir’s Ishq Tera Tadpave, we also know a party can’t be complete without some trendy dance numbers! Hence, we bring you a list of songs that made us groove to its beats in 2021.

Naacho Naacho song from the upcoming film, RRR, features Ram Charan and Jr NTR showing off their dancing skills. The track, which is being called the mass anthem, is already winning the hearts of the audience.

A remake of the 2018 song by Pav Dharia, Najaa has catchy beats. Starring Akshay Kumar and Katrina Kaif, the song has become a hit among dance lovers. Sung by Pav Dharia and Nikhita, Najaa’s music has been given by Tanishk Bagchi.

Kriti Sanon’s Param Sundari broke records and was featured on the Billboard Global Excl US charts. The song’s vocals have been given by Shreya Ghoshal and the composition is by AR Rahman. The lyrics of Param Sundari have been penned by Amitabh Bhattacharya.

When it comes to dance numbers, no one does it better than Nora Fatehi. Her song Zaalima Coca Cola, from Bhuj: The Pride of India, received an overwhelming response soon after its release. Crooned by Shreya Ghoshal, the song is composed by Tanishk Bagchi and the lyrics are penned by Vayu.

Not sure about you, but we are still not over the catchy track, Bansuri, and its cool steps. The song from Kriti Sanon and Rajkummar Rao’s Hum Do Hamare Do has Punjabi lyrics and a rhythm that will compel you to get on the dance floor. Composed by Sachin-Jigar, the song has been sung by Asees Kaur, Ip Singh, Dev Negi and Sachin-Jigar. The lyrics of the song have been penned by Shellee.

Honey Singh and Nushrratt Bharuccha’s single Saiyaan Ji kept everyone hooked to its lyrics and beats. On the other hand, Nushrratt created quite a stir on social media with her moves in the music video.

Kusu Kusu is a groovy track from John Abraham’s film Satyameva Jayate 2. Nora impressed the audience with her phenomenal expressions, beauty and elegant dance moves in the music video. Crooned by Zahrah S Khan and Dev Negi, the song is composed and written by Tanishk Bagchi.

We hope you dance your heart out this New Year’s Eve to these party numbers!