Social media users tweeted at Richa Chadha for the stereotypical image in the first look poster of Madam Chief Minister and to take into account the criticism directed towards the film from the Dalit community. 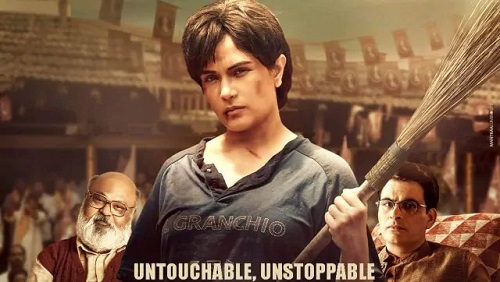 Richa Chadha recently unveiled the first look poster of her upcoming political drama Madam Chief Minister. In the poster, she can be seen holding a broom, covered in muck. The tagline reads, “Untouchable, unstoppable.”

The image has received significant backlash for being tone deaf, misrepresenting the Dalit community, and for not casting a Dalit actor in the lead role.

Social media users tweeted at the actor for choosing to play the role and to take into account the criticism directed towards the film from the Dalit community.

Believed to be based on Mayawati, who has served four terms as the Chief Minister of Uttar Pradesh, the film is written and directed by Subhash Kapoor. Kapoor has previously helmed satirical comedies like Phas Gaye Re Obama, Jolly LLB and Jolly LLB 2.