Arshad Warsi, most recently seen with Bhumi Pednekar in Durgamati, is slowly and steadily broadening the range of characters he is playing onscreen, thanks to streaming platforms 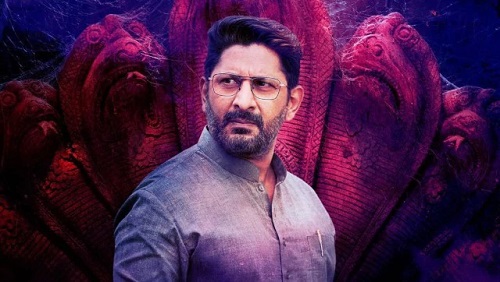 Arshad Warsi is not a big fan of horror genre but he agreed on Durgamati not just for its interesting and unpredictable script but because “the film didn’t have all those elements that I don’t like in horror. I don’t like ugly faces, blood, gore, somebody’s head blown off…The whole atmosphere, the house, the eeriness of spirit, I liked all that. I look for a good role and a good film, a film that I would like to see.”

“And then I got a serious role to play for a change,” adds Warsi. “Playing a politician, playing somebody way more mature than I am was great fun. My character Ishwar Prasad is pretty much like the original (Telugu film Bhaagamathie) but my body language and style of dialogue delivery is different.

Being someone who believes horror as a genre is difficult for an actor to perform, Warsi is all praises for Bhumi Pednekar. “I feel bad for Bhumi. That poor girl has gone through hell. She was dragged, pushed, thrown here and there. She went through a lot of torture. Fortunately I didn’t have to do all that. Bhumi is very hard-working, she puts her heart and soul into her work. She just doesn’t give up, she wants to give her best. I was quite impressed with her. I have also seen the original and I know how difficult it must have been to be part of it.”

Warsi may be more popular for his comedic turns in Munna Bhai, Golmaal and Dhamaal but he has been appreciated for his distinct characters in films like Hogi Pyaar Ki Jeet, Ishiqiya, and Jolly LLB. He even garnered critical acclaim for playing a police officer (SSP Ajay Kumar) in the crime drama Sehar (2005). The actor says stereotyping is not a problem but definitely a cycle he wants to break out of. “I have to keep doing different genres otherwise it is like being fed the same food everyday of your life. You will get fed up with it no matter how much you like it. I love doing comedies but at the same time I want to mix it with a couple of serious films here and there. I need movies like Durgamati, Jolly LLB, Sehar, and Ishqiya to keep me going. These movies don’t come to me very often.”

The versatile actor is slowly and steadily broadening the range of characters he is playing, thanks to streaming platforms. Warsi calls the OTT sphere a boon that has provided him with an opportunity to play more “serious” roles. Quite recently, he made his digital debut with Asur, a Voot Select crime thriller, in which he played Dhananjay Rajput, a forensic expert.

In cinema I am mostly getting comedy parts. I have been waiting for so many years and OTT has offered me various serious roles and I am doing most of them. Actors who haven’t got their chance to prove themselves in cinema have got a chance in OTT. I have been appreciated in Asur and I am going to start shooting for Asur 2 as soon as I finish Bachchan Pandey (Sajid Nadiadwala production’s film co-starring Akshay Kumar, Kriti Sanon and Jacqueline Fernandez). I will wrap Bachchan Pandey, which is completely nuts, mad comedy and then I will go to a very serious dramatic set for Asur,” says Warsi. “It is going to be great fun for people to watch Akshay and I together. We are completely insane, two mad people who enjoy doing comedy. The film is going to be bizarre and I love Akshay’s character in the film. We plan to start the shoot January next and will wrap up in March.”

Warsi has been busy with a lot of narrations during the lockdown but the story he is eagerly awaiting to hear is of Golmaal’s fifth instalment. “But I know that suddenly I will get a call from Rohit Shetty, he will summon me saying, ‘Come, we are listening to the script’. Sooner or later it will happen,” divulges Warsi, adding that the chances of Munna Bhai 3 happening appear bleak. “I don’t think Munna Bhai 3 will happen. I really doubt it. This is the strangest thing to happen. You have a producer and director who want to make the film, we have almost three scripts ready, we have actors who are all set. There are people waiting to watch it but still there is no film.”

Meanwhile, he isn’t complaining being holed up indoors with his family. “I have been enjoying myself. I am chilling, relaxing, hanging out with kids, and my dogs. My wife Maria (Goretti) has been cooking some great food and we are all putting on weight. I love being on the sets and I love being at home as well. I can’t say that I am missing work. I love going on bike rides, hanging out in mountainous regions and greener places. I live my life like that. I like not to work too much. With pandemic happening looks like we have started valuing life.