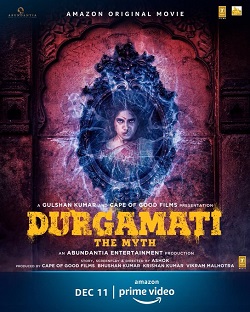 Bhumi Pednekar’s upcoming film, Durgavati, has now been renamed Durgamati. The film will release on 11 December on Amazon Prime Video.

In the poster, Bhumi is seen facing the camera intensely. Her bindi is partially rubbed off and she appears to be in an angry and revengeful mood.

Akshay Kumar, who is a presenter of the film, also tweeted the new name and poster of Durgamati The Myth.

Bhumi started the shooting of the horror film in January this year. Durgamati is directed by Ashok.

Durgamati is a Hindi remake of the Telugu horror film titled Bhaagamathie, which featured Anushka Shetty. The film was about a woman imprisoned in a haunted house while being interrogated in a corruption case.

In an interview with news agency Press Trust of India, Bhumi had earlier said, “It is the most challenging and special film for me as it is for the first time the responsibility will be on my shoulders. Durgavati is something I’m most pressured and excited about. Akshay sir is a genius, I respect him.”

According to a report in The Indian Express, Bhumi will essay the role of an IAS officer in Durgamati who is made the victim of a major conspiracy involving powerful forces. She will be seen imprisoned in a haunted house interrogating a corruption case.