Laxmmi Bomb will start streaming on Disney+ Hotstar this Diwali on 9 November. 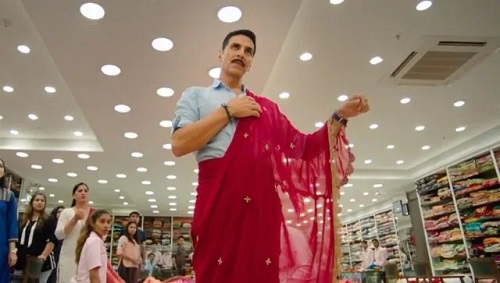 The trailer of Akshay Kumar and Kiara Advani-starrer Laxmmi Bomb released on Friday. The actor tweeted the trailer on his official page and asked all to stop and watch it.

The 3-minute-40-second trailer of the horror-comedy film is packed with funny dialogues. The trailer shows that Akshay visits Kiara’s family house to convince her father for their marriage.

The trailer also shows Akshay wearing a red coloured saree and bangle. He is even seen sporting a big bindi on his forehead. The trailer shows both the actors dancing to the ‘O Burj Khalifa’ song.

Laxmmi Bomb is a remake of super-hit Tamil horror comedy Kanchana and is helmed by choreographer-turned-director Raghava Lawrence. The film will release on Disney+Hotstar on 9 November. Ahead of the release of the trailer, Akshay shared a screenshot from the film where he and Kiara are seen in Arabic attire.

The original Kanchana 2 is a horror-comedy, starring Lawrence, R Sarathkumar, and Raai Laxmi in lead roles. The film follows the journey of an innocent man who is possessed by a couple of vengeful ghosts to get justice for their murders.

The film is one of the seven major Hindi movies to get a direct-to-digital release on Disney+ Hotstar.

Laxmmi Bomb will be the first movie in Akshay’s career that has skipped theatrical release. His other upcoming cop drama Sooryavanshi, is awaiting to hit theatres soon.