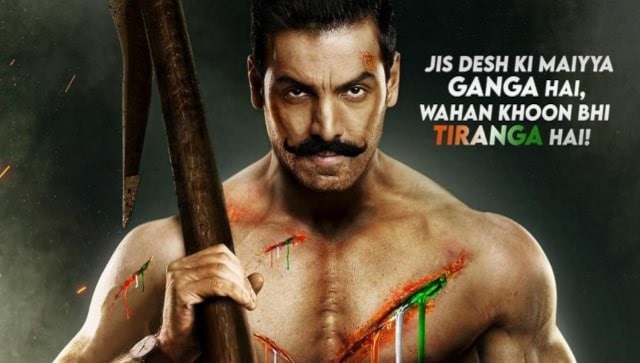 Makers of John Abraham-starrer Satyameva Jayate 2 on Monday announced that the action-drama will release theatrically on 12 May, 2021.

Produced by Bhushan Kumar’s T-Series and Emmay Entertainment, the Milap Zaveri-directed film is a sequel to the 2018 hit. It also stars Divya Khosla Kumar.

The makers released a poster featuring Abraham where he carries a plow over his shoulders.  The gashes on Abraham’s body ooze out the tricolour instead of red.

Zaveri said Eid is the perfect occasion to release the film as Satyameva Jayate 2 is a celebration of “action, music, dialoguebaazi, patriotism and heroism.”

“With Bhushan sir, Monisha Advani, Madhu Bhojwani and Nikkhil Advani backing me once again, I can promise next year on May 12 we will do our best to deliver a festive bonanza for all audiences,” the director said in a statement.

The film is a departure from its original Mumbai setting and will see Abraham fighting corruption in Lucknow. Trade analyst Taran Adarsh tweeted that the filming is going to begin from next month. A Times of India report says the actor’s character will be seen quashing corruption in “all spheres from the police to politicians, industrialists, and the common man.”

Zaveri said the decision to change shooting location to Lucknow gave the team a chance to make it “more massy” with a larger canvas.

“Visually also Lucknow adds to the scale and grandeur. The action of this film is gonna be ten times more dynamic, heroic and powerful,” he added.

Filmmaker-producer Nikkhil Advani said the success of Satyameva Jayate has encouraged them to make the sequel bigger and better.