While responding to fans over the PUBG ban, Dosanjh said he would rather play SUB-G in the kitchen than playing the popular combat game 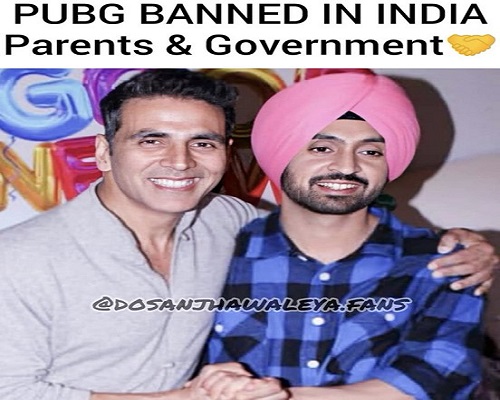 The ban on popular combat game PUBG has created ripples on the internet as game lovers shared their despair over the government’s move, while many are just making the most of the opportunity to crack up memes.

Actor and singer Diljit Dosanjh also shared a meme that featured him and actor Akshay Kumar.

Both the actors who have worked together in the hit comedy Good Newwz, were seen smiling in the picture. The meme creator posed the actors as the parents and the government who seemed to be happy after the addictive combat game was banned by the government.

This resulted in multiple Twitter users asking Dosanjh whether he played the popular game. The GOAT singer’s reply to one of the users was also pretty hilarious, and got a lot of traction on Twitter.

Meanwhile, Dosanjh’s fellow star in the meme, Akshay Kumar made an announcement earlier today. The actor presented an action game called the Fearless And United-Guards or FAU-G. Launching the look of the game, Kumar said that the game was created under the aegis of Prime Minister Narendra Modi’s AtmaNirbhar movement.

Kumar said that players, apart from being entertained, will be able to learn more about the sacrifices of our soldiers while playing this game. Also, 20 percent of the “net revenue generated” from the game will be donated to a trust called Bharat Ke Veer.