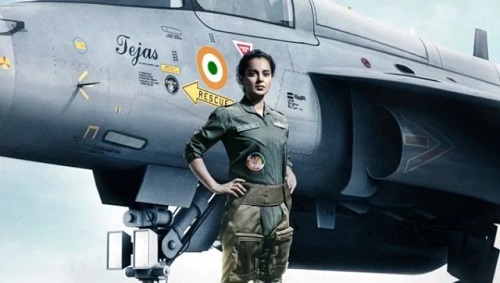 Kangana Ranaut shared a new poster of her upcoming film Tejas on Friday. In the picture, the actress can be seen wearing the Indian Air Force uniform and standing in front of a Tejas fighter jet.

Kangana announced that the filming of Tejas will officially take off in December this year.

Tejas is being produced by Ronnie Screwvala and will be directed by Sarvesh Mewara.

In February, the first look of Tejas was shared by the actress on her social media page. Kangana in a statement had said that very often the sacrifices made by brave women in uniform go unnoticed.

“Tejas is a film where I have the honour of playing the role of one such air force pilot that puts country before self. I hope we instill a sense of patriotism and pride in the youth of today with this film,” the actress added.

According to a report by Pinkvilla, Kangana’s training for the film began in July. However, due to the COVID-19 pandemic, the schedule may have been postponed. The initial release date for Tejas was April 2021.

Kangana will next be seen in Thalaivi, a biopic on former Tamil Nadu Chief Minister J Jayalalithaa.

Kangana will don the director’s hat for the second time in Aparajitha Ayodhya which will focus on the Babri Masjid-Ram Mandir issue. She had made her directorial debut with Manikarnika: The Queen of Jhansi where she also played the lead role.