Priyanka Chopra’s saree in the song, Desi Girl paved the way for experimentation and made it the ultimate sexy outfit. 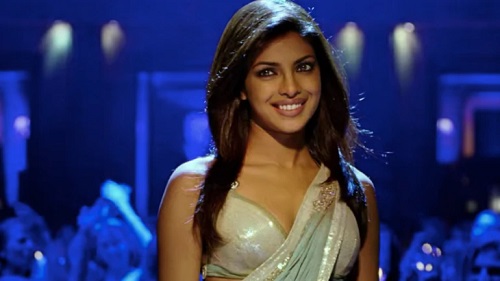 Fashion and Bollywood go hand-in-hand. A character’s clothes play a major role in defining the mood of the film. Yet a saree, in particular, remains Bollywood’s favourite. From Mumtaz in a pre-pleated orange saree dancing away with Shammi Kapoor in Aaj Kal Tere Mere Pyaar Ke Charche from Bhramachari (1968) to Zeenat Aman in a white saree sans blouse under a waterfall in Satyam Shivam Sundaram (1978), Mandakini in a similar avatar in Ram Teri Ganga Maili (1986) or Madhuri Dixit going Dhak Dhak in an orange saree in Beta (1992), the six-yard has given us many history-defining moments.

However, what Priyanka Chopra did when she teamed a bikini top with a Manish Malhotra metallic saree, was a revelation. The song that earned the title of ‘Desi Girl’ for Priyanka Chopra made the saree sexy and bold and portrayed it in a never seen before manner. Moreover, it cleared the misconception that sarees are not as sexy as any other evening outfit.

The Priyanka Chopra, John Abraham and Abhishek Bachchan starrer Dostana released in 2008. The film was talked about for its storyline, the palpable chemistry between the three and the chic wardrobe of Priyanka Chopra’s character.

The song Desi Girl has Priyanka Chopra looking as elegant as ever in a simple saree. She manages to steal the spotlight in the ballroom crowded with people wearing stunning evening gowns in her humble six-yard. Priyanka’s metallic saree that had a sequinned border, teamed with a barely-there halter neck bikini blouse, made her stand out. Do not miss the tiny little bow at the back of the blouse and the bling on the straps that played a major role in defining the entire ensemble.

This masterstroke by Manish Malhotra became such a hit at the time, that it has been recreated again and again and it is still one of the hottest looks even after 12 years. A sequinned or a metallic saree with a sexy slinky barely-there blouse is still a favourite go-to for any Bollywood diva.

The song and the look paved a path for experimentation on how to make the saree look sensual.

In 2010, Sonam Kapoor recreated the look thrice in the film I Hate Love Stories. She wore white, red and blue sarees with matching bikini top blouses in the song Sadka.