Salman Khan, who worked with Lara Dutta in Partner in 2007, promoted her upcoming web series Hundred on social media. 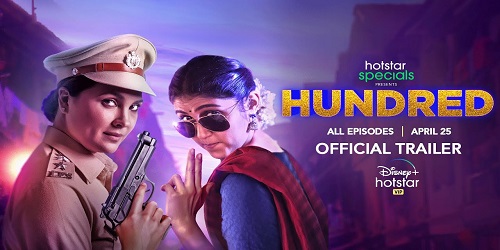 Do Khiladi Problem Bhaari!” says the tagline of Lara Dutta’s first web series, titled Hundred. Lara is making her digital debut with the upcoming show and this is the first time in her career that she is playing the role of a police officer. Hundred will starts streaming on Disney+Hotstar VIP from April 25.

While the actress is actively updating her fans about the web series on social media, she has her “Partner” Salman Khan right beside her through the promotions.

Salman, who shared screen space with Lara in the 2007-released Partner, has come forward to promote her web series Hundred on social media. In his post, the 54-year-old actor called his former co-star his “favourite heroine” and urged fans to watch the series.

The 42-year-old actress then took to her Instagram handle and reposted Salman’s post to express gratitude. Overwhelmed, Lara mentioned Salman in her caption as “coolest cop on screen” referring to Chulbul Pandey, his character in the Dabangg franchise.

Lara Dutta is essaying the role of ACP Saumya Shukla in Hundred. She has been cast opposite Marathi actress Rinku Rajguru, who is best known for her film, Sairat. Rinku is cast as Netra Patil.

Lara has been sharing pictures of her cop avatar on her Instagram handle.

Not just Lara, but Rinku is also making her digital debut with the upcoming web series. The trailer of Hundred was released on April 22 and it is an eight-episode series. The web series is co-directed by Ruchi Narain, Ashutosh Shah and Taher Shabbir.

Even if it is to promote Hundred, we’re glad we got to revisit Salman and Lara’s partnership, 13 years after the release of Partner. The film also starred Govinda and Katrina Kaif.