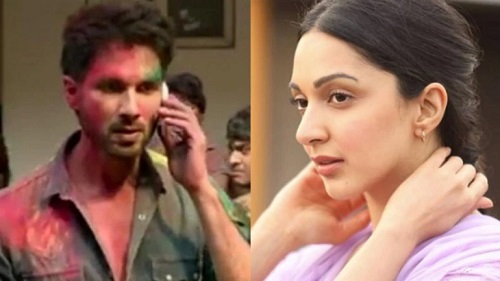 Shahid Kapoor held a Q&A session on Instagram where a fan asked the actor to describe his Kabir Singh co-star Kiara Advani in one word. Shahid’s answer was noteworthy.

Remember the scene where Preeti Sikka was harassed during a Holi celebration in Sandeep Reddy Vanga’s Kabir Singh? Shahid Kapoor’s character, Kabir Singh came barging in and asked, “Kisne touch kiya usko…?” While the dialogue has been used in various memes since the release of the film, it seems like Shahid doesn’t want you to forget it and move on.

Shahid recently held a Q&A session for his fans on Instagram. In the session, the Kabir Singh actor was asked to describe his co-star Kiara Advani in one word.

Shahid shared his answer on his Instagram story along with the fan’s question, saying, “Kisne touch kiya…?

The dialogue found its way into the meme universe in October last year, when a netizen wrote ‘Preeti’ on his mobile charger and shared the photo on Twitter saying, “Ab koi mera charger touch nahi karega.”

The meme was noticed by Kiara and she responded saying, “Hahaha, one of the best ones,” in her Insta story back then.

The ‘kisne touch kiya’ dialogue has also become a new viral meme at the time when India, along with the world at large, is fighting against the novel coronavirus, by giving social distancing a new meaning.

In the film, Shahid essayed the role of Kabir Singh, a medical student with significant anger management issues, who falls in love with Preeti Sikka, his college junior. Preeti’s character was essayed by Kiara Advani. Despite receiving negative reviews from critics, Kabir Singh enjoys a massive fan-following.

On the work front, Shahid Kapoor will be seen in the upcoming film Jersey, although the shoot of the film has been halted as of now due to the Covid-19 pandemic. Kiara Advani recently appeared on the Netflix show Guilty and now has films like Bhool Bhulaiyaa 2 and Laxmmi Bomb in her kitty.