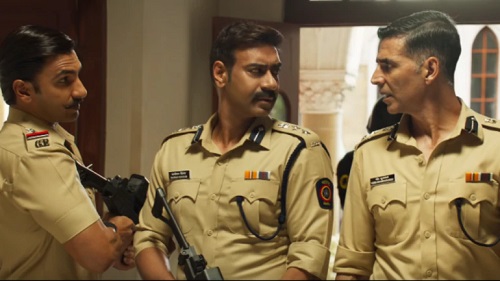 Salman Khan-starrer Dabangg (2010) was an out and out entertainer. The film is known for its comedy, entertainment value and of course, songs. With those black Ray-Ban aviators and quirky dialogues, the masaledaar cop Chulbul Pandey did make us laugh. But he failed to make us think.

Then came Ajay Devgn playing the role of Bajirao Singham in Singham (2011). An honest cop, prioritising his duty above everything. The film had ample masala with cars blowing up in the air, catchy songs, glass windows shattering, fighting sequences and what not! But, at the heart of it was a message – any fight can be won by standing up together. In Singham, Bajirao united his police force against a corrupt politician and ensured that justice is served. “Hum police wale chahe na toh koi mandir ke bahar se ek chappal tak nahi chura sakta,” he says, echoing that the police has enough resources to act against those who dare to defy the law, all they need is unity.

Similarly, in the sequel, Singham Returns (2014), there is Baba Satyaraj Chandra, who brainwashes the public and gets away with heinous crimes such as rape and murder. All because he is being shielded by politician Prakash Rao and the blind faith of his followers. “Aam aadmi ki takleef dar paida karti hain, aur dar andhvishwaas ko aur andhvishwaas mujhe,” he says proudly.

Bajirao Singham, once again, unites the entire police force against the two and puts them behind bars. Apart from this, Singham Returns also focuses on the need of young people in politics. This is shown by Guruji (Anupam Kher) wanting to include more and more young people in his party. In a scene, Bajirao Singham says to some young men, “Garam khoon hai? Toh iska sahi jagah istamaal kyon nahi karte. Jaise hum duty karte hain, tum logo ki bhi kuch duties hain. Chhor raha hoon, kyunki jail ko nahi, is desh ko tumhari zaroorat hai.” On the surface, this is just a dialogue, but the message it delivers is self-explanatory.

Another thing that Singham and Singham Returns compel us to think about is how often we weave the entire story with half-information and call it the truth. In Singham, an honest police officer is blamed for taking a bribe, to the extent that he commits suicide out of shame. In Singham Returns, constable Mahesh is also believed to be the same when his dead body is found with a vehicle full of cash. The truth turns out to be way different in both cases.

Rohit Shetty’s third cop film, Simmba (2018), is different from the earlier two. Here we have a cop, Sangram Bhalerao (Ranveer Singh), who only took up the job to extort money and enjoy the ‘perks’ of being a policeman. It is only after a tragedy that he changes his ways and fights for justice. His transformation mirrors the sad reality that until something terrible happens to us or the ones we care about, we hardly bother doing something. And that this is wrong on so many levels and needs to change. We shouldn’t wait around for a tragedy to knock at our door to stand up for what is right.