The makers of Angrezi Medium and Gunjan Saxena: The Kargil Girl announced a change in their projects’ release dates on 17 February (Monday). According to the announcement, Irrfan Khan and Radika Madan’s drama will now be out on 13 March instead of 20 March. 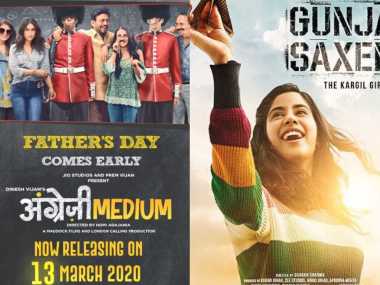 Karan Johar, the producer of Gunjan Saxena said the drama will hit cinemas on 24 April, a date which was originally reserved for the horror comedy, Roohi Afzana.

Angrezi Medium, a slice-of-life comedy features Khan as a doting father and owner of a sweet shop, who bends over backwards to get his young daughter a foreign education. The trailer, which was unveiled on 13 February, shows Khan in a hilarious exchange with Tillotama Shome’s admission officer, where he realises that the admission will cost upto a crore.

Besides Khan and Madan, Kareena Kapoor Khan, Dimple Kapadia, Pankaj Tripathi, Deepak Dobriyal, Ranvir Shorey, and Kiku Sharda are also part of the cast. Angrezi Medium is directed by Homi Adajania, who has earlier helmed films like Being Cyrus, Cocktail, and Finding Fanny.

Meanwhile, Gunjan Saxena is based on the story of Flight Lieutenant Gunjan Saxena. The film will be a tribute to one of the first women Indian Air Force pilots who went to war. Tripathi will portray Kapoor’s onscreen father and Neena Gupta will play her mother. Angad Bedi will take on the role of the protagonist’s brother. Rajat Barmecha, Vijay Varma, Manu Rishi, and Harsh Chhaya will portray pivotal characters as well.