Makers of Maidaan have unveiled Ajay Devgn’s first look as a football coach in the sports drama set for a November release. The actor will essay the role of football coach Syed Abdul Rahim in the film who coached India to victory at the Asian Games in 1951 and in 1962. He also served as the manager of the Indian football team from 1950 till 1963. 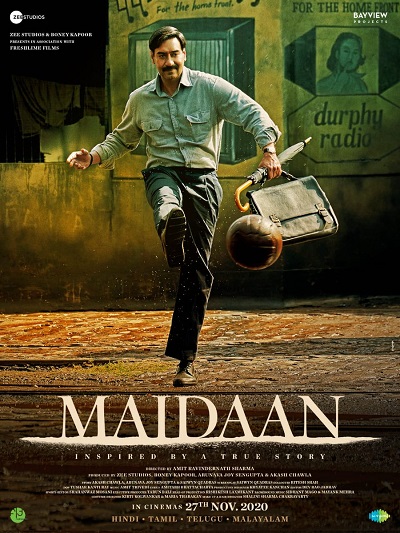 Devgn shared his first look poster on social media, adding that the narrative of Maidaan charts the “golden years of football.

The film is being directed by Amit Ravindernath Sharma of Badhaai Ho! fame. National Award-winning actor Priyamani stars as the female lead opposite Devgn.

Keerthy Suresh, who was earlier supposed to star alongside Ajay, was replaced by Priyamani as the makers felt that she looked “too young” for the part.

“Keerthy shot for the film for a day. After the shoot the makers and Keerthy both felt that she looked too young as she had lost a lot of weight since being signed for the film to authentically portray the role of a mother as has been written in the script,” a statement from the makers read.

Keerthy and the producers then decided to part ways so as to stay true and authentic to the film’s story.

Priyamani most recently featured alongside Manoj Bajpayee in Amazon original The Family Man. She will next step into the shoes of Sasikala in the J Jayalalithaa biopic Thalaivi. Meanwhile, Ajay Devgn’s latest release Tanhaji: The Unsung Warrior, has been on a money-minting spree. Currently in its fourth week of release, the Om Raut directorial has made a total of Rs 228.96 crore.

Maidaan is produced by Zee Studios, Boney Kapoor, Akash Chawla and Arunava Joy Sengupta. Saiwyn Quadros and Ritesh Shah have been credited for screenplay and dialogues, respectively.
The film is scheduled to be released on 27 November.