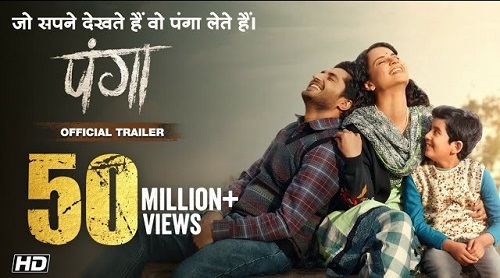 Kangana Ranaut’s latest release Panga has had a slow opening day at the box office. The film, which released alongside Varun Dhawan and Shraddha Kapoor-starrer Street Dancer 3D, made Rs 2.70 crore on its opening day.

According to trade analysts, the film picked up pace during the latter half of Friday. However, the film has not performed well in Tier 2 and Tier 3 cities. It’s commerce is expected to improve during the weekends because of positive word-of-mouth.

Panga revolves around a retired Kabbadi player, essayed by Ranaut, who is hoping to make a comeback in the game. Directed by Ashwiny Iyer Tiwary, also features Richa Chadha, Neena Gupta, Jassie Gill, and Pankaj Tripathi in key roles.

Speaking about the film to Firstpost, Ashwiny said in an interview, “Panga is not a sports drama in its purest form. It is a human story and just like the characters in my previous films they are all real and relatable people. It isn’t a biopic or based on any real person. It’s a very universal idea. It was very important for me to tell this story in the era of co-parenting and supporting each other. Today, we have both, husband and wife distributing work. It’s about co-existing and helping each other. There are hundreds and thousands of ‘Prashants’ and ‘Jayas’ (characters played by Jassi Gill and Kangana) in the country. It is a universal idea.”