Akshay Kumar, Kareena Kapoor Khan’s comedy Good Newwz is winning at the box office. The film which opened to decent collections of Rs 17.56 crore on Friday, earned Rs 21.78 crore on Saturday, thus taking the total box office collection to Rs 39.34 crore so far. Trade analysts note that Good Newwz is performing well in the metro cities and eyes to mint Rs 65 crore over the opening weekend. 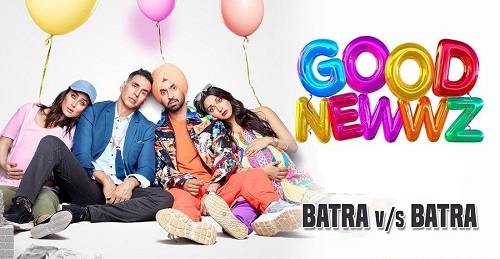 Also starring Diljit Dosanjh and Kiara Advani, Good Newwz deals with the confusion that ensues after Kumar and Dosanjh’s sperms get exchanged in an IVF clinic. The film has been jointly produced by Karan Johar Dharma Productions and Akshay Kumar’s Cape of Good Hope Films.

After having worked in films like Ajnabee, Bewafaa, Kambakkht Ishq, and Tashan, Kumar and Khan feature together onscreen after almost a decade. Good Newwzz is also Dosanjh’s first film with Dharma Productions.

Meanwhile, Kumar who has had a successful 2019 with back-to-back hits such as Kesari, Mission Mangal and Housefull 4, is gearing up for Rohit Shetty’s cop drama Sooryavanshi. He will also been seen in Raghav Lawrence’s Laxmmi Bomb, opposite Advani. Kumar has also started working on historical drama Prithviraj alongside Manushi Chillar.

Khan who was last seen in Veere De Wedding, has recently wrapped up shooting for Angrezi Medium. She is currently shooting Aamir Khan’s Laal Singh Chaddha, and also has Karan Johar’s ambitious Takht, which is likely to commence early next year.