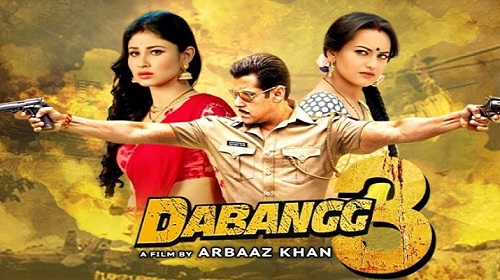 Salman Khan’s Dabangg 3, the third instalment in the cop franchise, has had a decent opening at the box office. The film collected Rs 24.5 crore on its first day.

Considering the film is the only Bollywood release this week, and is led by Salman Khan, the first-day earnings do not seem to be as high as his earlier films, such as Bharat (Rs 42.30 crore) and Prem Ratan Dhan Paayo (Rs 40.35 crore). However, trade analysts have cited the Citizen Amendment Act Protests (CAA) protests that have rocked the nation as the reason behind lower footfalls in theatres.

The first film, released in 2010, minted Rs 14.50 crore on the first day, becoming the highest opener of all time across India. Dabangg 2 (2012), which collected Rs 21.10 crore on the first day, went on to become the second-highest grosser of the year behind Salman’s other release of the year, Ek Tha Tiger. The critical response to Dabangg 3 has been quite less than overwhelming. Critics have panned the movie for its hackneyed plot and its monotonous protagonist, Chulbul Pandey. Dabangg 3 sees Sonakshi Sinha reprise her role of Chulbul’s wife Rajjo. Arbaaz Khan once again plays his younger brother Makkhi. Vinod Khanna’s brother Pramod essays their father Prajapati in the third instalment. Kannada actor Kiccha Sudeep plays the antagonist Balli. The film has been directed by Prabhu Deva.