After a one-year break (his very first in his 47-year-old career), Rishi Kapoor is back, looking enthusiastic and looking forward to continue his golden run. Last seen notably in films like Mulk and Rajma Chawal, the veteran actor will return to the big screen with The Body, a murder mystery and remake of a 2012 Spanish mystery thriller, that also stars Emraan Hashmi and Sobhita Dhulipala.

Directed by Malayalam thriller Drishyam-fame Jeethu Joseph (he makes his debut in Bollywood), the film will have Kapoor play an investigative police officer in this crime thriller. 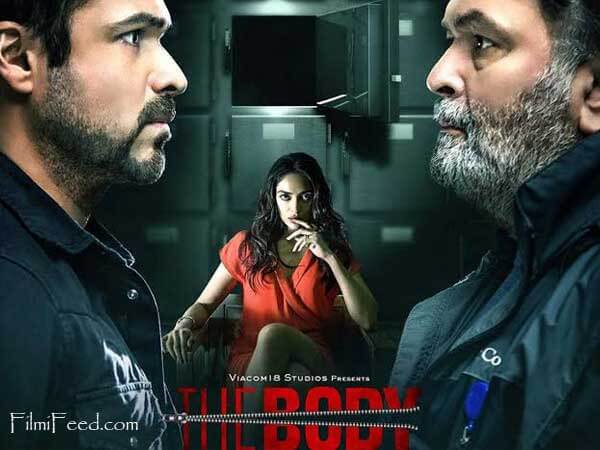 The veteran actor is enjoying his second stint, as he has always said. “I now get a chance to actually act, and win awards on merit.” Breaking from his romantic image, Kapoor, in his golden innings, has reinvented himself, and won acclaim for his unusual and superlative performances in films like Agneepath, D-Day, Kapoor & Sons, and most recently, by playing a 75-year-old son to Amitabh Bachchan in 102 Not Out, and the critically acclaimed Mulk.

The Body breaks his image, yet again

Kapoor, who plays a cop in the suspense thriller, is excited about playing different roles. He says he could never do so in his heydays. “If you look at my graph, in my times, when I was a hero, I have only done films which were expected of me because of my image of that of a romantic hero. Mr Bachchan was the action hero. We never had a chance of doing films like Vicky Donor, Bala, Andhadhun. This kind of content was never made in those days because audiences were not ready for that. Today, audience has evolved. They are not going to take nonsense. In my time, every actor had done four to five films, and all based on lost and found. If in my time, Vicky Donor was made, they would have banned the film. I am happy that the transformation is taking place,” he says, adding, “But yes, I have also done some progressive films like Doosra Aadmi, Ek Chaddar Maili Si, and a few more but these films didn’t work then probably because people didn’t understand these films.”

“What is also exciting is the audience today is more accepting of seeing senior actors in prominent roles on screen. It’s a very different scenario today. He (Joseph) has made a film with me and Emraan Hashmi, where we both are playing important roles in the film. I don’t want to play the usual father. That is all rubbish. I want to play after the hero, maybe as good as hero, whatever age it may be but my character in the film should be very demanding, and it should be one of the central characters of the story. But otherwise character actors have got no image. We are like potato and carrot that can mix into any dish. Whether you make biryani or anything, potato just fits into anything. If we have the talent and caliber then we will contribute well but the dish will be called biryani only (laughs).”

However, the actor is tight-lipped about his upcoming film, and cannot give away much. “It’s a suspense thriller, a remake, and I cannot tell you more about the story. Only after watching the film one would understand. But obviously, The Body is not in the same genre as Mulk or 102 Not Out because in those films, I had the scope to perform. This is more of an avante-garde film, you will like it for its content but not so much for the performances. But then too, I have tried to put little bit from my side.”

Working with the new director

“My experience is vast so it becomes easy for me to work with any director. Basically I am a director’s actor. But there are some directors who are very stubborn and difficult then that reflects in my work. I have decided not to work with them again. It is their loss, not mine. I am not saying that I am world’s greatest actor but I want some freedom to express myself. But I can’t tell you my process,” says Rishi.

Kapoor also reveals Joseph, who had helmed Drishyam, was keen to have him headline the Hindi remake, which eventually featured Ajay Devgn. “Jeethu had directed the original Drishyam, and he wanted me to do the Hindi version. If you see the Tamil version, it has Kamal Haasan. It was supposed to be a senior hero and not a junior… it was meant to be a senior man. But I am not a saleable star. I couldn’t get the audiences in so obviously they would not make the film with me,” he said.

On one hand, Kapoor is happy playing central characters but he has been also refusing many films for the fear of “carrying the burden of the entire film”. “The ones I don’t want to do is because sometimes I get worried that what if the film will get sold or not. If you are playing the main role, then its making, exhibiting, getting the audience becomes your responsibility. Then you feel disappointed that the film didn’t get a good release. It flopped or a big film took away all the theatres.

Hence, I tell many makers not to cast me because I can’t take big responsibilities. You can do that if there is a huge star in the film so that people come to see the star at least. I can only add to the story with my work but I can’t bring the audience to theatres. I just love playing interesting characters. I don’t mind if the film is small. I’m not a star, I’m an actor.

I suppose filmmakers come to me when they are not able to get a hero, and they want to just make a project. But I am not a desperate actor. I have got name, fame, money. I can’t be forced to work. How many actors have worked for 47 years? And I am a working actor. I am working since 1972. Bachchan and Dharmendra took long breaks. Dev (Anand) saab, Dilip (Kumar) saab did one film in three to four years. There are two generations who have come in front of me. I don’t do film for money. I never compromise with whatever my status is. I have never been told that the film didn’t work because of me or that my work was bad,” Kapoor adds.

“I didn’t find the time. When I tried hands at directing, I had lot of pressure from Veeru Devgn, Rahul Rawail. They all wanted me to act, and then the flow never stopped. But my passion was acting, and direction is a very demanding job. Also, I don’t want to direct because I am a very critical person. I look at very small, minute details. I will get unwell if I turn director. But who knows tomorrow Ranbir (Kapoor, son) might direct? We have not closed the door. But filmmaking is not a factory. It is a creative field. Either you know it or you don’t.”

“There are so many next generation kids of filmmakers who couldn’t make it or became actors. After all, we are chosen by the people. You can’t force people to watch somebody’s son or daughter. Now, that can be called nepotism. That way, nepotism started with our family… with Raj Kapoor. He was a huge actor Prithviraj’s son but nobody talked about nepotism then. Why? Because we had to really slog. Bobby was a super hit and I was cast because no other actor was available for this teenage love story. Dimple Kapadia played the titular role. After Bobby, I gave quite a few flops. I was the same son of Raj Kapoor. I worked hard, and recreated myself. I had the talent. After several flops, I bounced back after reinventing myself. People forget all this,” he adds.

Does Rishi evaluate his work?

“No because most of the times, I don’t watch my films. Once the film is released and the result is out, I become very conscious. After my final dubbing, I watch my film, and for the same reason, I don’t watch Ranbir’s films because I am a very critical person so I don’t understand what is good and what is bad. My wife Neetu (Kapoor) is a practical person whereas I get very tense when I watch my film. I don’t have any clue how it will fare at the box office. I’m engrossed in several other thoughts rather than the film: its story or the dialogues. Therefore, I lose out watching some important scenes, and I am totally disconnected to the film. I am so self-critical that I won’t be able to tell you which of my performances were the best.”

Kapoor’s next is tentatively titled Sharmaji Namkeen with Juhi Chawla, his co-star of films like Bol Radha Bol and Daraar among many. “I want to look different in every film and every character so for this film, I’m growing a beard,” he says. He is also excited about doing a love story, “where the girl is 35 years younger than me. It is a mature love story,” he says. But he is most excited about reuniting with his wife Neetu for the Hindi remake of super hit Bengali film, Bela Seshe, directed by Shibo Prasad Mukherjee. The film looks at an older couple’s journey and their separation after a four-decade-long relationship. “I may do this film with Neetu. It is about a married couple who, after 40 years of marriage, are divorcing. Shibo Prasad has offered me the film. We are still in talks,” he concludes.